Similar to the earlier shoot of Clacton Pier my intent was to record the smaller details of the pier’s deck and the superstructure of the pier. I wanted to adopt an approach that would allow the images to be viewed as a consistent body of work within my overall project.

Based on the equipment used for the Filter House I decided to focus on using a DSLR with a range of lenses to allow me to alter my gaze of the peer.

Clacton Peer is a large structure stretching 2,160 metres into the Thames Estuary. On this shoot of the second pier I adopted an approach of recording wide angle images of the pier plus details of the superstructure and the deck. 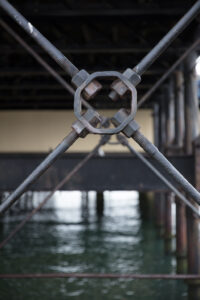 The images of the pier and its superstructure were much more successful in my view. I especially liked detail of the iron structure that supports the pier. The closeup cross braces and the tensioning system was fascinating given its important to ensure the pier structure does not buckle and collapse under the constant pressure caused by the waves crashing into the pier. 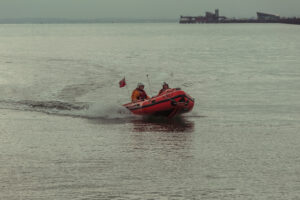 During the time I was at Southend Pier the RNLI were executing a test launch to ensure that they could deploy safely in the event of a real emergency. I was hoping to get to see the rapid deployment of the RNLI rib however the images captured did not portray the sense of urgency I would expect to observe when deploying their boat.

In addition to the general research material on piers reference in the Clacton Pier post I gathered specific information about Southend Pier (En.wikipedia.org, 2017) that covered the origins of the pier and a high level overview of its history.

During the shoot I managed to capture some detailed images of the superstructure of the pier plus details of the decking and items on the pier. I felt they provided a good starting point to telling the story of Southend Pier yet further visits will be required to capture more of the piers details.