Sandford Mill is a Water Treatment Plant on the edge of Chelmsford that was opened in the 1950s to provide water to the expanding market town. The facility was decommissioned in the 1980s the site is now owned by Chelmsford Museum as their out of city Science and Education unit. The Filter House is the largest building which has not been not been given a new role.

The objective for this a visit was to shoot a final set of images to complement images from the first shoot at Sandford Mill.

The site is currently without power and because of vandalism a number of the windows have been boarded up reducing the level of natural light. A number of the spaces are large and contain reflective surfaces.

I decided for this final visit to use following equipment: DSLR with a number of zoom lens 24-70 f2.8. The lack of natural light meant that additional light would be used to supplement natural light. I decided to use 2 Quadra 400 Ws packs plus soft boxes to complement the soft diffuse light from the large windows.

Based on the previous visits to the site I decided to focus exclusively on the details within the building. The camera was set to square format to ensure that I could correctly frame the images for the intended publication and exhibition surfaces. Having visited the site multiple times I was able to focus on details in specific areas of the building. 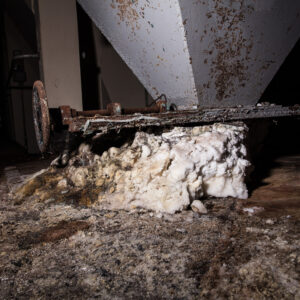 This image showing the chemical waste created by the water treatment process for me was strong due to the white crystal formation of the chemicals contrasting with the corrosion on the bottom of the hopper. 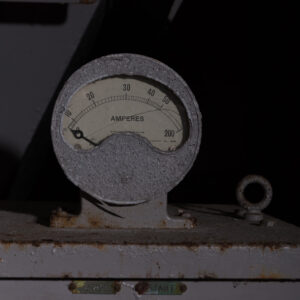 Though I like the image when taken it did not appear to sit with any particular sequence and therefore did not make the final selection.

Having settled on the story within the Filter House and having made a number of design decisions I was able to focus on the capturing images that would complement images that were part of the first cut selection list from the earlier visits.

Having reference images and details of lighting setups made the process easier to execute and allowed me to focus on the specifics of framing.

After this visit I felt I had enough images to use when making the final selections for the book dummy and the 18 images that would form the work in progress portfolio for the module.